Love, Victor is an American romantic comedy series created by Isaac Aptaker and Elizabeth Berger, based on the 2018 movie adaptation, Love, Simon from Becky Albertalli novel, Simon vs. The Homo Sapiens Agenda. It premiered on Hulu on June 17, 2020.

Season 1
The series follows Victor, a new student at Creekwood High School on his own journey of self-discovery, facing challenges at home, adjusting to a new city and exploring his sexual orientation. When it all seems too much, he reaches out to Simon to help him navigate the ups and downs of high school.

Season 2
The popular teen dramedy returns as season two finds a newly out-of-the-closet Victor entering his junior year at Creekwood High. But being out brings with it new challenges as Victor faces a family struggling with his revelation, a heartbroken ex-girlfriend in Mia, and the difficulties of being an openly gay star athlete — all while navigating the excitement of his relationship with Benji.

Season 3
This season finds Victor going on a journey of self-discovery — not only deciding who he wants to be with, but more broadly, who he wants to be. With their post-high-school-plans looming, Victor and his friends are faced with a new set of problems that they must work through to make the best choices for their futures.[6]

In April 2019, Disney+ gave the 20th Century Fox Television–produced show based on the film Love, Simon a straight-to-series order, with the writers of the original movie, Isaac Aptaker and Elizabeth Berger, attached as showrunners.[9] The show would focus on brand new characters and would be set in the same world as the movie.

In February 2020, the series was retitled Love, Victor and moved to Hulu, with a scheduled premiere date in June 2020, making it the second series after High Fidelity to move from Disney+ to Hulu.[11] In April 2020, it was announced that the series was scheduled to premiere on June 19, 2020.[12]

In June 2019, Ana Ortiz was cast as Isabel.[15] In mid-August, the series' full cast was announced, with Michael Cimino as the lead, Victor. Also announced were James Martinez as Armando, Isabella Ferreira as Pilar, Mateo Fernandez as Adrian, Johnny Sequoyah as Mia, Bebe Wood as Lake, George Sear as Benji, Anthony Turpel as Felix, and Mason Gooding as Andrew. It was also announced that Nick Robinson, who starred in the film, would produce and narrate the series. [16] Later that month, it was reported that Rachel Hilson had been cast as Mia, replacing Sequoyah. The recast was made in order to take the character in a new creative direction.[17] On October 23, 2019, it was also announced that Sophia Bush had been cast as Veronica, Mia’s father’s new girlfriend.[18]

On March 3, 2022, it was reported that Nico Greetham had joined the series the third season as Nick, a new friend Victor meets at church.[22]

The soundtrack EP for the first season, featuring three new songs by LGBT artists and all co-written by Leland, was released on June 19, 2020, by Hollywood Records.[27]

The soundtrack for the second season, featuring 8 original songs by artists within the LGBTQIA+ community and all co-written and co-produced by singer/songwriter Leland, was released on June 11, 2021, by Hollywood Records.[28][29][30][31]

The soundtrack for the third season, featuring 3 original songs by artists within the LGBTQIA+ community and all co-written and co-produced by singer/songwriter Brett McLaughlin (aka Leland), as well as a cover of Yazoo's «Only You» performed by Jonah Mutono, was released on June 15, 2022, by Hollywood Records.[32] 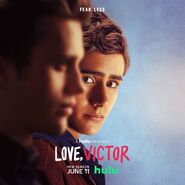 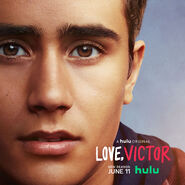 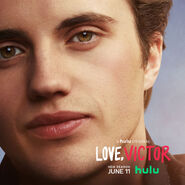 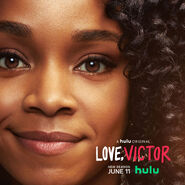 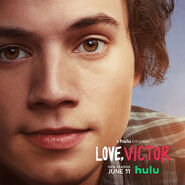 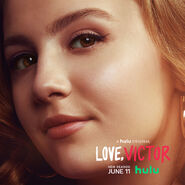 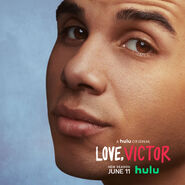 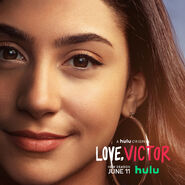